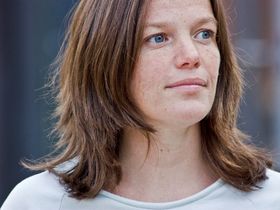 Initially trained in Classical Ballet followed by completing a BA (Hons) at the Laban Centre, London, worked as a dancer for choreographers including Wayne MacGregor, Liz Aggiss, Vicente Saez and Gary Stevens. In 1996 she was supported by the British Council to study in New York at the Merce Cunningham and Trisha Brown studios followed by a choreographic residency at Le Groupe de La Place Royale Ottawa, Canada.

In 2003 she was granted a French government studio at Le Cite Internationale Des Arts Paris and in the same year was awarded a Creative Scotland award. Until 2006 she focused on solo work with commissions from TRAMWAY,  Dark Lights, Ze Dos Bois Gallery Lisbon and The National Review of Live Art 2004. In 2005 she worked with visual artist Kirsty Stansfield on the piece Object Scores that was part of the exhibition Communication Suite curated by artist Christine Boreland.

Her latest performance work, Learning for the future, was shown at Birmingham International Dance Festival and the Southbank Centre in Autumn 2018.

More information about Colette can be found at colettesadler.com