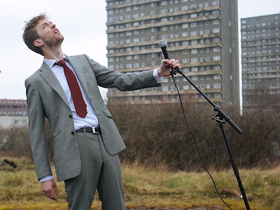 Kieran Hurley is a multi-award-winning writer, performer, and theatre-maker based in Glasgow whose work has been presented throughout the UK and internationally - working with us for Looping: Scotland Overdub. Recent work includes A Six-Inch Layer of Topsoil and the Fact It Rains (Perth Theatre); Heads Up (Show And Tell); Rantin (NTS/ Arches); Chalk Farm (with AJ Taudevin, ThickSkin), Square Go (Roundabout @ Summerhall, Edinburgh Fringe) co-written with Gary McNair; and critically acclaimed Mouthpiece (Traverse / HighTide), which premiered in December 2018.

Photo Credit: Jassy Earl for Heads Up (Show And Tell)