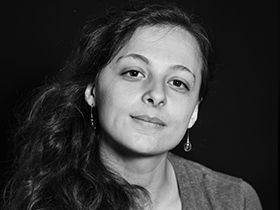 Pauline was born in Grasse in the south of France. She started with a ballet education in ESDC Rosella Hightower in Cannes, followed by a contemporary education in Codarts Rotterdam Dance Academy.

She started her career first as a freelancer in the Netherlands and worked more deeply with the choreographer Hiedi Vierthaler for choreographic collaborations and for the continuous development of her Stream-Flow movement method. They met in 2010 and have kept on working together since then. Pauline is part of Heidi Vierthaler's collaborative group, Hato Project.

In 2012 Pauline joined Regensburg Dance Theater, under the direction of Yuki Mori, and has worked there with choreographers such as Marina Mascarell, Stephan Thoss, Giuseppe Spota, Ihsan Rustem, and Shumpei Nemoto.

In parallel to her career as a dancer, Pauline also developed her own choreographic work and was selected in November 2017 by the Choreographic Centre of Heidelberg to be one of the five residents of the 2017 season, for their programme, Focus Global.