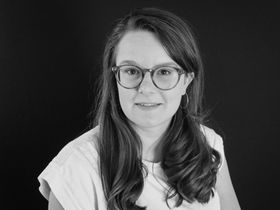 Lottie Barker has worked with Scottish Dance Theatre since 2011 when she began as an intern assisting with the organisation of The Great Big Dance Show. Since then she has had a varied career in the arts working with organisations such as Arts 4 Dementia, the British Ballet Organisation, Dance House Glasgow, Royal Conservatoire of Scotland and Scottish Ballet. As a freelance producer and community arts facilitator, she enjoys ensuring that dance can be accessible for all individuals and is passionate about working with those with barriers or perceived barriers to participation.

She began working as an Audience Development Associate for Scottish Dance Theatre in 2016 and is responsible for organising outreach events at our UK tour venues. In 2019 Lottie took on a role as one of our Producers, working specifically on Dundee and rural-based activity. As Lottie was an assistant producer for Joan Cleville Dance at the inception of his company in 2013 she is delighted to be back working with Joan in his role as Artistic Director of Scottish Dance Theatre.